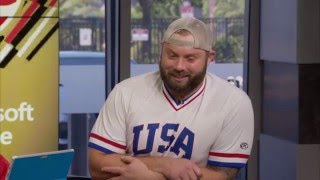 The San Francisco 49ers already hit one home run with an Appalachian State product when they landed Daniel Kilgore in the fifth round in 2011. The organization is hoping they’ve found another gem in Ronald Blair, a fellow Mountaineer selected with a fifth-round pick in 2016. The two never crossed paths as college athletes, but San Francisco’s rookie defensive lineman remembers Kilgore returning to Appalachian State to speak to the team. Kilgore connected with Blair following

Fifty-one starts in four seasons. Ronald Blair wore many hats in those appearances for Appalachian State, and he was quite productive while being a versatile defensive lineman in college. The San Francisco 49ers fifth-round selection slid across the defensive front for the Mountaineers to record 221 tackles, 21 sacks, 53.5 tackles for loss, four forced fumbles, two fumble recoveries and one interception. Blair, 6-foot-4, 270 pounds, was named the Sun Belt Conference’s Def

Jason Vander Laan produced a record-setting career as quarterback at Ferris State. However, if the Chicago Christian graduate is going to make the New York Jets roster as an undrafted free agent, it will be as a tight end — a position he has never played. The 6-foot-4, 244-pound Vander Laan is undaunted by the challenge. In fact, he said, "bring it on." "I'm confident I can make the transition," said Vander Laan, who signed Saturday with the Jets. "I feel comfortable. I know
bottom of page